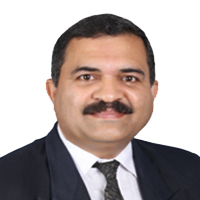 Anil Hebbar is a Director of TSP and one of the key founders of TSP and instrumental in getting it off the ground in 2011 and in its growth and presence today as an organization of integrity and credibility; an organization that students/youth and institutions that reach out to. Anil has used his long innings as an activist, as a successful entrepreneur and his business acumen as a businessman in shaping the evolution of TSP as an organization that is respected in India and Asia and as a result now referred to TSP Asia.

As a successful entrepreneur, Anil heads Emergent Medi-Tech (I) Pvt. Ltd. which has been at the forefront of introducing cutting-edge technology in Cardiology & Cardiac Surgery. They have been pioneers in cardiac stents, implantable defibrillators, intravascular ultrasound and simulation based medical training.

The country’s Top Simulation Centres at Yenepoya Medical University, D. Y. Patil Medical University and Symbiosis have been set up by the Company. He has vast experience in Hospital Consultancy, implementation of Modular OTs, setting up and running of Diagnostic Laboratories, manufacturing of urology disposables. The Emergent group has given employment to more than 250 people.Side by side he has been giving his time and resources to a range of organizations and which TSP does also leverage for grass roots exposure, social entrepreneurship skill development and above all working towards Sustainable Futures.

Anil’s engagement includes among others the following: Permanent Invitee to the Trust of National Youth Project (NYP) started by veteran 90 – year old Gandhian Dr. S. N. Subba Rao which has moulded more than 4 lakh youth through week long camps held in a different part of the country every month. Trustee of Bharat Jodo Abhiyan started by Late Baba Amte who was awarded the Templeton Prize, the Alternative Nobel and the Padma Vibushan. Bharat Jodo Abhiyan works for furthering National Integration and Peace Making. Anil cycled 5,800 km from Arunachal Pradesh to Gujarat for this cause.

. A Permanent Invitee to the Trust of Yusuf Meherally Centre, Tara, a well known movement for spreading the tenets of socialist thinking and action, started by Veteran Socialist Dr. G. G. Parikh. They are in the forefront of political education, village industries like soap making, cold pressed oil extraction, pottery, bakery etc. They also run seven schools for adivasis and children of migrant salt pan labourers. Chairman of National Museum of the Indian Freedom Movement which has setup a picture gallery of the Freedom Movement at Kora Kendra, Borivli and brought out a book on the Oral History of the Indian Freedom Movement. Trustee of Bombay Sarvodaya Friendship Centre which works in the field of watershed development, spread the message of Sarvodaya across the world. Trustee of Development and Justice Initiative, Delhi an organization working with UNHCR among the Rohingya migrants in Jammu, Mewat and Jaipur and among migrants in Delhi slums. Founder Secretary of ASOMEDICS, an umbrella body of medical devices distributors in Mumbai. Actively supports Sulabha Special School at Tilak Nagar, Chembur, a 35-year old Institution working for the education and vocational training of mentally challenged children & adults up to the age of 35 years. Also, actively supports the Association for the Blind in conducting eye camps. He is the Treasurer of the Maharashtra State Government supported Nashabandi Mandal which works in schools and colleges against the evils of drugs, tobacco and alcohol addiction. Currently, advising 1000 workers of Century Mills at MP in takeover and running of Century Yarn & Denim from the Birlas. Active member since inception of Mumbai Pollution.in, a body of residents of Chembur and Anushakti Nagar fighting for the closure of the Deonar dumping ground issue with the resultant smoke pollution. He has met the Chief Minister twice on this issue and lobbied with the media to raise public awareness.

Under Anil’s TSP leadership we will soon be conducting training programs for Corporation Officers and look at solutions to solve this mega waste problem of a Mega City, using Systems and Sustainability Thinking. These training programs will be led by Robert Steele, Managing Director of Sustainability Accelerator Network (SAN) and who has conducted two successful programs for TSP. More information on SAN will be made available under Partnerships.